Home / Articles / Lisa Murkowski to Mark Begich: Knock it off 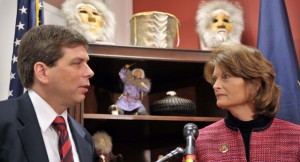 By KATIE GLUECK for Politico

Representatives for GOP Sen. Lisa Murkowski are demanding that her fellow Alaskan, Democratic Sen. Mark Begich, take down a campaign ad featuring her image — an unusual instance of two sitting senators from the same state in a public spat.

In a letter disseminated on Thursday, the law firm for Murkowski’s Senate committee skewered a Begich ad in a cease-and-desist missive. The ad in question, “Great Team,” features Murkowski and Begich appearing together, along with testimony from an individual who says he is a lifelong Republican, a Murkowski voter —and also a Begich supporter.

The letter charges that Murkowski’s image was used misleadingly and without her permission, and that the individual in the ad is not a lifelong GOP supporter but is in fact undeclared.

The photo in question, however, appears to be hosted by the Associated Press.

“Alaskans have responded positively to the message that Alaska’s congressional delegation works together across party lines to do what’s best for Alaska,” said Alaskans for Begich Communications Director Max Croes in a statement, going on to reiterate that the pair has voted together “more than any other Democrat-Republican pair in the U.S. Senate.”

Begich, running in deep-red Alaska, has sought on several occasions to highlight shared positions with Murkowski. But she is distancing herself.

“Senator Murkowski has repeatedly made clear that she wants a Republican elected to Alaska’s other Senate seat,” says the letter, which is on stationery from the law firm of Holmes Weddle & Barcott. “Senator Begich should run on his own record and not attempt to deceive the public into believing he has support that does not exist.”

Alaska’s GOP primary, which will determine Begich’s Republican opponent, is on Aug. 19.

Manu Raju contributed to this report.